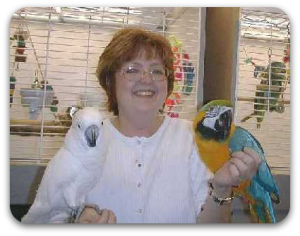 Lori A. Drew is the Founder and President of the Center for Animal Rehabilitation & Education, Inc., (C.A.R.E., Inc.) formerly The Pet Network Inc. She has also received her national certification as a Veterinary Technician and Avian Specialist.

Lori turned her love for animals into a career in 1993, when she became Operations Manager of a small suburban animal shelter. Feeling too restricted in the animal welfare capacity, she then became employed as a Veterinary Assistant at a clinic that specialized in orthopedic surgery. After being promoted to Office Manager at this practice, she decided to broaden her skills and horizons by moving to a veterinary ophthalmology specialty clinic. She received her national certification as a Veterinary Technician in 2000. She now works part-time at MADACC.

As Lori’s first love has always been animal welfare, she established The Pet Network Inc. in 1996. In 1998, this organization became a 501(c)(3) non-profit tax-exempt organization. Originally, the main focus of The Pet Network was to help place special needs animals from home to home. However, after several months, it was obvious that there were not many groups available to take care of exotic birds. As a result, Lori decided at the end of 1998 to concentrate solely on rescuing exotic birds.

After working out of her home since 1996, Lori was finally able to find The Pet Network a new home in a small storefront location in Milwaukee, WI in September 2000. It was – and continues to be – fully manned by volunteers and will continue to be until it is self-sustaining. As of January 1, 2004, The Pet Network Inc. changed its name to the Center for Avian Rehabilitation & Education, Inc. to better reflect the avian-centered activities and ideals of its organization. Through the years, Lori was also moved by the plight of small senior dogs and founded a volunteer-staffed, non-profit organization to rescue and find good homes for these fine animals. In 2017, the services of both organizations were combined into a single 501(c)(3) under the name Center for Animal Rehabilitation & Education, Inc., (C.A.R.E., Inc.). CARE moved to Richfield, WI in May 2004 and is now located at 720 N. Barstow in Waukesha, WI.

Lori has extensive experience in bird behavior, behavior modification, bird medicine, and hand-feeding baby birds.  Pre-Covid, she spoke on bird behavior and bird first aid regularly and did many school programs annually. She has been quoted in Bird Talk magazine on the topic of adding a new bird to your home “flock,” and hopes to do more writing in the near future.

Lori lives with her Pug mix, Logan, at her home in New Berlin, WI.  Lori’s Umbrella Cockatoo, Magoo, happily lives at CARE and greets all volunteers and visitors.